Clark Griswold: “Despite all the little problems it’s fun isn’t it?”
Ellen Griswold: “No. But with every new day, there’s fresh hope.”

Like a lot of lawyers, you may have gone on vacation, or perhaps you plan to go on vacation.

So, what constitutes a vacation? Of course, lawyers love definitions, so Merriam-Webster suggests: “a period spent away from home or business in travel or recreation, a scheduled period during which activity (as of a court or school) is suspended, a period of exemption from work granted to an employee, a respite or a time of respite from something.”

So, did this actually happen? Did you totally go off the grid for that period when you had a choice? Probability suggests you checked your email, perhaps late at night or first thing in the morning before the family woke. A little quality time with your iPad perhaps.

Why do people go on vacation? Change of pace? To get away from it all? Family pressure? To de-stress?

Perhaps you hope that this de-stress hormone lasts for as least as long as the vacation itself. Or that you can you store the de-stress hormone up as easily as the extra weight you may have put on from the extra consumption of alcohol, fats and carbohydrates that you would have otherwise avoided.

In a 2018 American Psychological Association survey of more than 1500 U.S. workers, two-thirds of the respondents said that the mental benefits of vacation disappeared within a few days. So, the vacation calmness disappears far before the weight loss does.

The reasons for increased après-vacation stress can be obvious. The workload undoubtedly accumulated in your absence, things moved on during your gallivanting. Now you must move double-time to catch up and all of that stress-filled time you spent before the vacation appears not to have been enough to keep you ahead.

If you feel stressed before the vacation and even more stressed after the vacation, then one starts to wonder about the efficacy of going on vacation in the first place.

This becomes a good time to talk about burnout. In the 2015 edition of Acta Psychopathologica, work-related stress occurs when the demands of the work environment exceed the employees’ ability to cope. The American Psychiatric Association’s Diagnostic and Statistical Manual 5 states that disorders precipitated by specific stressful and potentially traumatic events in the workplaces are included in a new diagnostic category, “trauma and stress-related disorders.” Mind you, this abstract was dealing with the police in Italy.

If you sprain your ankle playing tennis for the first time since forever during your vacation, you likely know RICE: rest, ice, compression and elevation. The same RICE can identify burnout with regret, inefficacy, cynicism and exhaustion.

Over 40 per cent of California lawyers would do something different if they had to do it over again. This constitutes a high level of regret. Lack of actualization can lead to a feeling of inefficacy, and difficult as it may seem, burnout indicates even higher levels of cynicism that what you normally have. Exhaustion likely originated during articling and never dissipated.

A number of firms insist upon employees taking vacation. The firm’s rationale could range from an actual concern for employee health or for the ever-expanding health-benefit costs. If an employee leaves as a result of stress, there comes the extensive cost of locating, rehiring and training new staff. Far better to maintain the mental health of the existing staff.

In addition to vacations, employers should be considering breaks during the work cycle. Standing up and getting that wilted salad to eat in front of the computer does not cut it. An employee requires greater dedicated time to mental breaks along with physical activity on a regular basis.

The same APA study found that staff became far more productive and content with their position when employers cared about employee’s mental health.

How does an employee determine if an employer does not care about employee health and only cares about maximum productivity? Here’s a handy list of things to look out for:

If you have one or more of these items in your workplace, then perhaps consider changing the culture or finding a new one.

Photo by bruce mars from Pexels 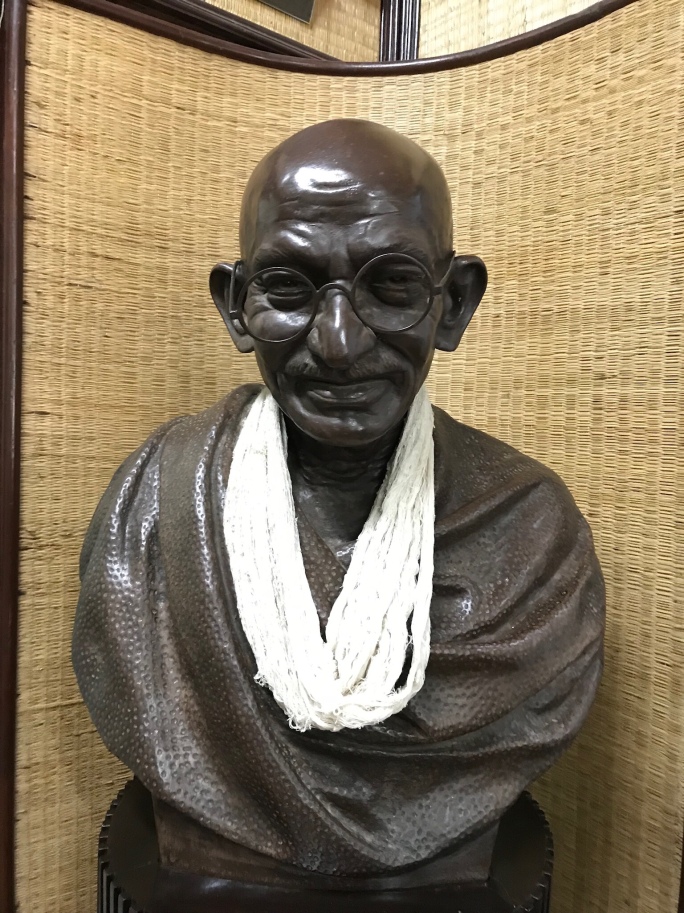 “Be the change you want to see.”

Statue of Gandhi from our time in India.

Office romances are a fraught affair. (And by office romances, I am referring to fully consensual relationships between adults, which is important to clarify in a #MeToo era)

In a recent 2019 Vault survey of over 700 participants, over 60 per cent of respondents admitted to dating a co-worker. In a Career Builder survey, only 36 per cent of respondents admitted dating a co-worker. The Career Builder survey appears to have a higher contingent of reticent respondents. The Vault survey also stated that over 70 per cent of employees over the age of 50 have had an office romance. This may simply reflect a longer period of opportunity, but I prefer to interpret this as a tremendous argument against ageism.

Office romances continue to happen mainly because of continuing exposure, having something in common, possessing additional information and knowing that that the HR department vetted this person. However, we have seen how HR notwithstanding, conducting extensive psychometric testing does not necessarily uncover everything. Even with social media, we are becoming more interconnected but disconnected all at the same time.

So, for example, a financial institution with 50,000 staff may have thousands of employees who are dating or have dated a co-worker. From an enterprise risk management perspective, this seems like a high probability that something could go wrong.

To mitigate this risk, according to the Vault survey, over 30 per cent of people dating a co-worker do carry on and marry. At the very least, if something goes wrong, it could no longer be suggested that the company did something wrong. In enterprise risk management parlance, we call that a transfer of risk.

The further difficulty appears to be that of the people having a relationship, over 60 per cent of those people kept it secret. This poses a further risk to the company in that they may not even be aware of a potential risk. This is one of those unknown unknowns.

According to a 2017 Society for Human Resource Management survey, 42 per cent of companies have regulations in place addressing workplace romances. Most companies seem to prefer not being involved in the delicate situation of policing such a policy in the first place. Covering one’s eyes to a situation and believing it disappears only works when you are a toddler.

The first response from a legal perspective may be to ban such situations totally. Although lawyers appear to be risk adverse, they still seem to enter, leave and re-enter relationships like most normal people. After all, working in the same office is how Barack and Michelle met. I may speak for a majority of the planet occupants when I say they are missed. I base this on the Twitterverse that 107 million people follow Obama while 61 million people follow Trump.

But from a corporate perspective, such a ban detracts away from the corporate culture. An appropriate enterprise risk management office romance policy (ERMOR which is as close to AMOUR that I could get) should reflect the corporate culture. A total ban could negatively impact a company’s efforts to attract individuals when they are prohibited from being attracted to each other.

An appropriate ERMOR policy should be properly worded so as bring out those that would be disinclined to disclose a relationship in the first place. A company should consider training for supervisors in how to deal with workplace romances and how any discipline policy might be used. Office relationships should be possible so long as there is no negative impact on the individuals or the workplace. Any negative impact would then be subject to the progressive discipline policy. And not the 50 shades type of discipline.

Such a policy would also prohibit any sort of fraternization between a manager and a direct report. This includes romances or dating. As lawyers, we love to define things.

Having a consensual relationship policy assists in clarifying the situation. Bringing light and transparency to any relationship helps ensure that there has been no inducement or other pressure brought to bare.  This may include some company expectations on discouraging public displays of affection. Most of us get this discouragement from our children anyway, so it’s not a far reach to include it in the company policy.

The same Vault surveys suggests that only 60 per cent of staff appear familiar with the Company office romance policy. This also suggests that HR could communicate the existence of such a policy and the need for staff to disclose a relationship. An appropriate EMOUR policy should not disinhibit disclosure any further by compelling staff to hide the relationship any further below the sheets so to speak.

For solo relationships, we can see how excessive self-love created an undue hardship situation for a corporation In the recent case of UNIFOR, Local 2215 v I.M.P. Group Limited, 2019 CanLII 42096 (NS LA),. Although TMI, lawyers must keep up with the case law lest AI take over the research department. This case would likely not make it through the AI’s virus protection or firewalls.

Vault also found that almost a fifth of workers had affairs. Once again, taking the probability of something going wrong multiplied by the impact of when something goes wrong, and ignoring any ethic or other moral questions, from simply an ERM perspective: Just. Don’t.

Be Inspirational
Your Financial Success